If you want to be inspired to lead a happier, healthier lifestyle and learn more about the Real Mediterranean Diet and are

The Mediterranean diet was virtually unknown in the U.S. a few decades ago and today it has become one of the most popular diets worldwide. Mediterranean diet experts and books are popping up everywhere with many descriptions and recipes that resembled very little to the food my mother, aunts and grandmothers cooked in Greece. There was and is plenty of misinformation about the diet.

Don’t settle for generic advice, get the information about the Mediterranean Diet from those who know.

As a Registered Dietitian Nutritionist with 20 years experience, writer and mother of two, living in Greece for the past 15 years, I have more than just a professional interest in the Mediterranean Diet, its preservation and promotion. As a Greek, I have been following the Mediterranean Diet my whole life, and have firsthand experience. However, having spent half my life in the U.S., I am proof that you can follow this diet from anywhere in the world.

With that in mind, I felt that it was time to clear up misconceptions and misunderstandings that have been circulating for years. Here I provide true, easy to follow information and make the diet relevant today and applicable to the modern way of life without sacrificing its true nature.

What you can expect from me is:

WHAT OTHERS ARE SAYING

“Thank you so much for making my family healthier! Thank you so much for making simple greek food so accessible! You are doing a truly important work by giving people the culinary tools they need to become healthier. You accompanied a profound change in my lifestyle and for this, you have all my gratitude. In a way, you have become a part of my family: when I talk about Elena, my wife knows it is you I am refering to.” -SL

“I adore your recipes and website. I have so many favorites… You have been such an important presence in my life since my family cholesterol gene kicked in two years ago and I delved into real Mediterranean cooking.” -C

“Thank you for your marvelous website. Using your basic advice, I have completely changed our way of eating at home. I find your approach so do-able..not heaps of complicated recipes just a sort of lifestyle template to follow.” -GD

“Our doctor suggested keeping it simple and to switch to a Mediterranean diet. He ended up having a triple heart bypass last August but his amazing recovery was due to the fact he had lost 60 pounds in the 8 months leading to his operation simply by following the Mediterranean diet and your manifesto which was placed on our fridge.” -KB

“I just wanted to let you know how much I enjoy your blog and how informative it has been for me. I have tried a lot of eating plans, but this is by far the best.  I have lost 25 pounds and never feel deprived.  It is also very easy to eat on this plan even if your are on a budget.” -CS

My story starts off in a Chicago suburb, where my mom would spend hours on end in the kitchen cooking Greek and only Greek food. At school while the other kids had bologna and cheese sandwiches, we had pastichio (a Greek type of lasagna), she never made toll house chocolate chip cookies like my best friends mom, instead we had to eat melomakarona, Greek honey and walnut cookies. And when our mother did decide to cook an American recipe, she’d always manage to sneak in that ubiquitous “Greek element”, hamburger patties with a sprinkle of oregano and lemon, cookies with olive oil… you get the picture. Thanks to mom, I basically was raised on the Mediterranean Diet even though we lived so far away from Greece, that was at the heart of this healthy way of eating.

As a child my life included yearly 3 month trips to Greece where I spent time with my grandparents, relatives and friends experiencing the Greek lifestyle and the Greek diet at it natural environment. When I was 11 I moved to Greece, and even then (the 80’s), most Greeks were eating meals with seasonal produce, a little bit of meat, and children were not eating junk food with the exception of an occasional ice cream in the summer. Returning back to the U.S. I started my studies in nutrition.

AND THE FORMAL RESUME

Elena Paravantes is an award winning Registered Dietitian, Nutritionist and Writer specializing in the Mediterranean Diet. She has been active in the field of food and nutrition for 20 years as a clinical dietitian, food and nutrition consultant, writer, teacher and lecturer, both in the U.S. and in Greece. Elena firmly believes in the wide-ranging health benefits of the Mediterranean Diet and is committed to educating the public about the wholesome food plan she grew up with through her writing, teaching and lecturing.

Elena developed the Food and Nutrition sections for the Greek editions of Men’s Health and Prevention as Food & Nutrition Editor, establishing them with her work for over 8 years. She is a former professor of nutrition at the American College of Greece and the Health Editor for Olive Oil Times. Elena provides consulting services on the 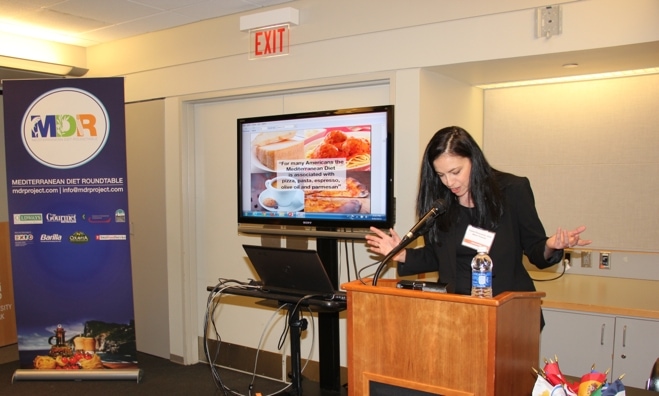 Presenting at the Mediterranean Roundtable in New York City

Greek/Mediterranean diet and food for companies, writes for several U.S. and Greek media outlets and blogs for Huffington Post. Her interviews and articles have been published in many publications including CNN, Prevention, Men’s Health, Women’s Health, US News and World Report, Shape, Fitness, Parade, Chowhound, Salon, Oldways, Fox News, Today’s Dietitian, Food and Nutrition Magazine and NPR. As well as Greek publications such as Vima, Eleftherotypia, Vimagazino, VimaGourmet, Athinorama, Iatronet and Madame Figaro. She is the lead author of the chapter on Greek Culture for the Academy of Nutrition and Dietetics publication Cultural Competency for Nutrition Professionals.

Elena earned her Bachelor of Science in Human Nutrition and Dietetics and her Bachelor of Liberal Arts and Sciences in Psychology from the University of Illinois at Chicago. She is a Registered Dietitian by the U.S. Commission on Dietetic Registration (CDR)

Based in Athens, Greece, Elena lives with her husband and her two sons.

I invite you to try my tips and recipes, read the articles and stories, stay up to date on the science behind the Mediterranean Diet, and of course, leave comments and suggestions.

© Olive Tomato and Elena Paravantes. Unauthorized use and/or duplication of this material without express and written permission from this blog’s author is strictly prohibited. Excerpts and links may be used, provided that full and clear credit is given with appropriate and specific direction to the original content.