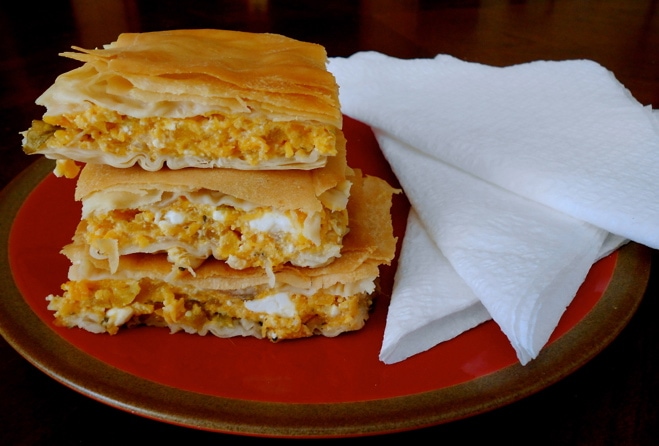 One of my favorite ingredients is of course pumpkin. I like anything made with it. Pumpkin pie comes to mind, but if you would like to try something different this Greek savory pie won’t disappoint. The sweetness of the pumpkin with the spicy feta makes a perfect combination. While pumpkin is not typically associated with Greek cuisine, they do have several recipes for this versatile vegetable: obviously Greek pies, patties, preserves (gluko koutaliou) or they may marinate it in vinegar and use it in a salad. Just to clarify, Greeks call pumpkin glikia kolokitha (sweet pumpkin), but they also call zucchini kolokithaki. So kolokithopita may be a pie made with zucchini or pumpkin but today I’m sharing a traditional recipe made with “sweet” pumpkin, feta cheese and phyllo. Yes it is the same concept as spana-kopita (spinach pie) and tyro-pita (cheese pie). Pita means pie and can be sweet or savory, although they are usually savory.

This pita is fairly simple. You do not use pumpkin puree as you would for a typical American pumpkin pie but the pumpkin is shredded and then heated in a pot until it is soft. I guess you could use ready-made pumpkin puree, but the texture may be different. For this recipe I took small chunks of pumpkin and heated until soft and melted, smashing with a fork, it has a bit of a chunkier result. Obviously shredding the pumpkin will help it cook faster. If you have a food processor, shredding will be quick, otherwise you can cut it in thin slices. For the phyllo, this time I used a bit of a thicker phyllo called horiatiko here in Greece and it has some olive oil in it, but I think I like it with regular phyllo better.

Now these pies are better consumed warm, otherwise the phyllo can get soft, you can re-heat but it won’t have the same result. Also for this recipe I made the pita in a big pan which is easier, but for the holidays I would prefer triangle wraps like I did here, I think they are easier to serve and consume.

So nutritionally this recipe has a lot going for it, olive oil is the main source of fat here, so you get mostly monounsaturated fat and of course this pita is an excellent source of vitamin A, potassium and carotenoids that are plant pigments that can turn into vitamin in the body and have antioxidant activity protecting from chronic disease. 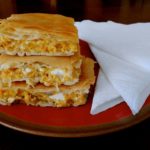 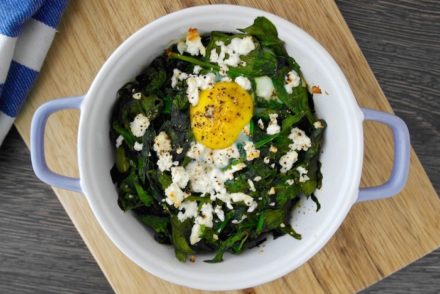 Baked Eggs with Spinach and Feta 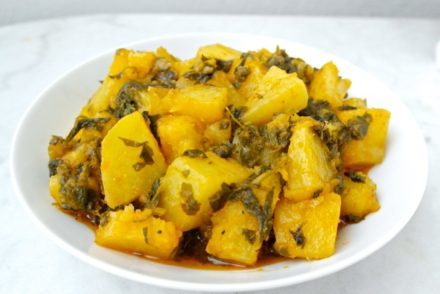 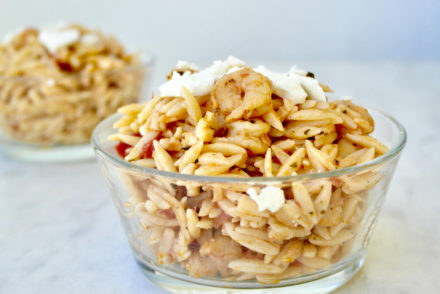