A traditional Greek-Cretan recipe: zucchini roasted with tomato, garlic and olive oil until tender and velvety.

I have been coming across this Cretan recipe lately: whole zucchini stuffed with garlic roasted in the oven with tomato and olive oil. While I roast zucchini in the oven, it is usually with something else such as in stuffed tomatoes or in briami (the Greek version of ratatouille). But I found this recipe interesting because the zucchini itself is the main ingredient.

I was attracted to this recipe not only because it uses zucchini, which is in season right now, but also because of its simplicity. It takes a few minutes to prep and then you just put it in the oven.

Zucchini is generally a popular ingredient in Greece: you find it in many casseroles, they use it to make zucchini patties (try these for a baked version), they slice them and fry them for an appetizer (try the a non-fried version here), they stuff zucchini flowers with rice or cheese and lightly fry them and of course they make zucchini pies (kolokithopita).

Zucchini is a very low calorie vegetable with only about 15 calories per 3 ounces, it is a good source of the carotenoids (pigments) lutein and zeaxanthin, these substances have antioxidant properties and play an important role in eye health. It is important to note that lutein is better absorbed with the presence of fat, so don’t forget the olive oil. This was the first time I made this and I ate as a main course with some feta and bread. It was delicious and the garlic was mild tasting. The zucchini are roasted whole. You can cut it in bite-size pieces or you can serve whole. I added a bit of extra tomato too. Once you cut the zucchini, it will release water, which is what you see in the photo, basically a mixture of olive oil and juices from the zucchini.

Roasted Zucchini with Garlic and Tomato-A Recipe from Crete 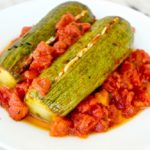 Serve whole or cut in small pieces. Accompany with feta cheese and bread.
DID YOU MAKE THIS RECIPE? Leave a comment or share on instagram and mention @greekdiet 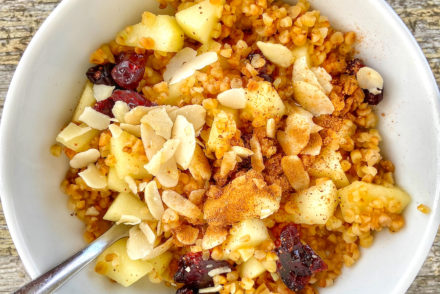 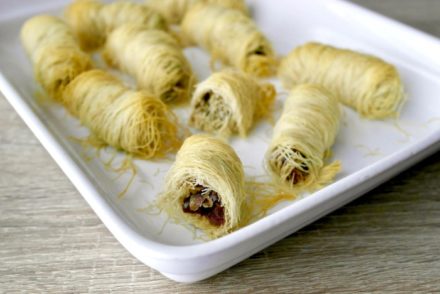 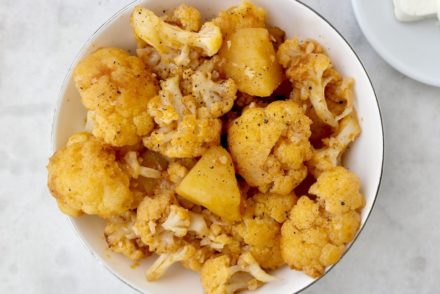